I made a special trip to a theater nowhere near my neighborhood (and in L.A., that really means something!) in order to see this documentary in 3D.  I’m glad I saw it, but my feelings about it shifted throughout the film…

…the phrases that played (danced?) across my mind as I watched the film were…bizarrely brilliant, weirdly wonderful, and mystifyingly mesmerizing.  Just when I would begin to think that I wasn’t “getting it” or that it was just too avante garde for me, it would draw me back in and take my breath away. 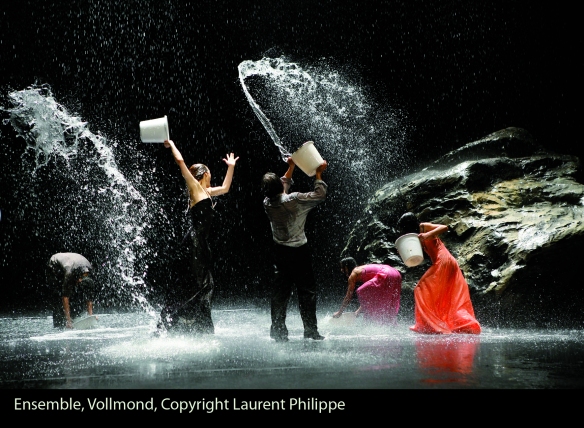 Pina is a Wim Wenders film dedicated to the late, great dancer/choreographer Pina Bausch, who passed away in 2009 (though we’re never told at what age or how ~ it’s only alluded to that she went suddenly or, as some of her dancers put it, “too fast”).  It is Bausch’s work that is featured primarily throughout the film, interspersed with snippets of “interviews” with her international band of dancers, which really only give us their experiences of her.  We never get any sort of biographical information about Bausch

, of which I’d have liked more.  The interviews (and I use that term loosely), are unique in that they, in many instances, use few words, instead using close-ups of facial expressions (in fact, in a few cases, no words are spoken ~ all feelings regarding Bausch and each dancer’s experience with her are communicated solely through the faces of the dancers being interviewed).  It’s actually quite remarkable ~ and is perhaps perfectly fitting given the art form being celebrated: dance/movement in place of words to convey emotion ~ pain, love, longing, loneliness, loss, joy, laughter, even aging…

And from what we are able to garner from the brief anecdotes by the dancers, Bausch was a wo

man of few ~ albeit powerful ~ words herself.  Several of her dancers claim that a very succinct comment or suggestion from Pina could (and did) forever alter their approach to dance.  That which packed the most powerful ~ and moving ~ punch was her urging of one of her male dancers to “Dance for Love.”

Their respect, admiration (near idolization) and most importantly, affection for Pina is palpable, both through the brief interviews as well as in their extraordinary performance of her works.

There are vignettes of dancers placed within the everyday world (cityscapes, trains, outdoors in nature, hovering on a dirt cliff, at an indoor swimming pool) juxtaposed against life/the world going on as usual beyond the dancer(s), in addition to full-on, lengthy (and astonishing) production numbers meant for an audience (vs for the camera only).  I was particularly blown away by a piece that takes place on a stage with a giant rock and (man-made) rain ~ it is a glorious blending of the elements and human movement.  Bausch’s choreography is utterly fascinating in its creativity. 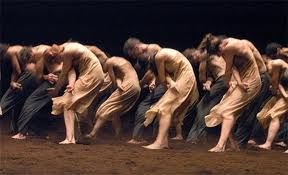 I’m not entirely convinced it was necessary to see in 3D, although there were moments that were quite beautiful due to the depth that 3D was able to provide. (Perhaps I’d need to see it in 2D to know for certain…)

I’d love to know the meaning behind some of the numbers (especially the longer pieces), as I wasn’t always certain what it was she intended to communicate through her choreography…though maybe she deliberately left them vague and open to interpretation.  Regardless, there is no denying she was an exceptionally gifted, endlessly creative artist who undoubtedly made ~ and left ~ an indelible mark in the world of dance.