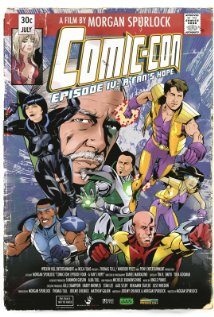 Whether you know ~ or care ~ anything about Comic-Con, the annual comic-book and Sci-Fi convention in San Diego, California that draws over a hundred thousand fans each year, this is a thoroughly enjoyable documentary film.  Despite my proximity to San Diego, I have never been to Comic-Con, nor have I ever had any burning desire to attend; however, I’ve always been curious about this much-talked-about yearly convergence of self-proclaimed “geeks” ~ and this was just the ticket into that wonderfully weird and wacky world.

Morgan Spurlock, the ubiquitous documentary filmmaker behind the fantastic Super Size Me and more recently The Greatest Movie Ever Sold, (who, I might add, does not appear at all in the film), presents a wonderful cross-section of the people who attend Comic-Con.  He accomplishes this primarily through following six different “fans” on their pilgrimage to San Diego.  They come from all walks of life and from all over the country ~ from Midwestern aspiring comic-book artists, to a life-long comic book collector and seller, to a young couple of “nerds” in love, to a would-be costume designer.  Each has a genuinely interesting, sometimes even emotionally engaging story.  (Dare I admit I got a bit misty-eyed a time or two?!)

In addition, the documentary is loaded with “celebrities” talking about what Comic-Con means to them.  These little “interviews” are great fun, particularly when either Kevin Smith or Joss Whedon is on screen, each of whom are hysterical and had me in stitches.

It’s remarkable to see how amazingly energetic, enthusiastic and genuinely kind to the fans the nearly 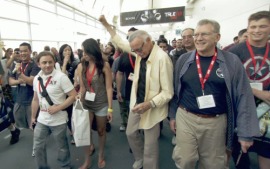 90-year-old (!!) Marvel Comics head honcho and comic book creator Stan Lee is.  He is living proof that doing what you love is good for your health!  It’s hard not to become a fan of his despite having never read a page of a comic book in my life!

The film is smart, fun, sweet, even touching at times, but most of all, extremely funny.  That’s a lot to accomplish in a mere hour and a half.  Best of all, it allowed me the experience of Comic-Con without having to endure the lines, the crowds and the apparent “stink” of the convention.  You’ll just have to see the movie to understand that reference.  And it’ll be well worth the price of admission.