At the risk of alienating all you Marvel Comics/Superhero fans out there, I have to be honest, The Avengers just didn’t do it for me.  As the highest-grossing movie of all time (surpassing the $1 billion mark world-wide in a mere three weeks), I figured there had to be a little something in it for everyone for it to be so hugely popular.  But if that’s the case, then I guess I’m not everyone.  No, Superhero flicks are not generally my genre of choice, but I have on occasion enjoyed them (The Dark Knight, Iron Man 1, the original Superman, to name a few).  So with all of the hullabaloo surrounding this box-office blockbuster, I really expected to be wowed.

On the contrary, I was actually bored.  I was uninterested.  I didn’t really care about anyone or anything.  The stakes weren’t great enough ~ or at least not intriguing enough ~ for me to even really be invested in who “won” or who didn’t.  I found it trite.  And loud.  And silly…unfortunately, not in an enjoyable, entertaining way, even when it was tongue-in-cheek silly.  Nor was it nearly as funny as I expected it to be, especially in the hands of the ordinarily witty Joss Whedon, whom I genuinely like and respect.  As the director and co-screenwriter, he’s one of the reasons I wanted to see this movie.  Sure, there were a few chuckles, but not nearly as many as I’d hoped for in the hands of Whedon.  Mostly, I just wanted it to be over.  (And for the guy incessantly fiddling with his loud candy wrapper to be taken out by one of the Avengers ~ now that I could have gotten behind.)

I wondered whether my inability to connect with the movie had anything to do with my not being all that familiar with many of the film’s featured comic book characters… but that doesn’t explain my enjoyment of some of the stand-alone Superhero features I previously mentioned liking.  Furthermore, many of the characters in The Avengers are played by some of my favorite actors (Robert Downey, Jr., Mark Ruffalo, Jeremy Renner) ~ but not even they could save it for me.  In fact, perhaps one of the reasons it didn’t “land” for me was precisely because it’s virtually impossible to adequately flesh out any of the characters given how many of them there are AND given that the bulk of their screen time is spent in battle.  Not a lot of character development can take place when the Superheroes are busy running, shooting, flying, and/or destroying anything in their path. 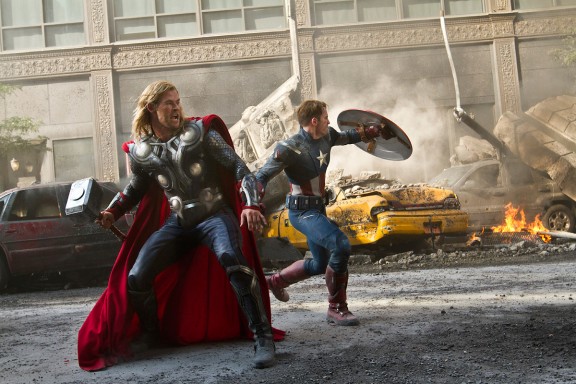 And therein lies another part of the problem for me.  I fully realize there’s a huge audience out there who thrives on non-stop action sequences, special effects and the like.  I’m just not one of them.  Some action is fine, so long as it’s exciting (which I didn’t find the bulk of this to be) and so long as it’s balanced with compelling story and dialogue ~ smart dialogue that serves the story and tells me something interesting and of value about who’s on screen and what’s taking place.  I understand that’s purely a matter of personal taste.

A matter of personal taste that made for a very long 2 1/2 hours.  All the (super)power to you if you loved it.  I know I’m in the minority.  But I’m afraid I won’t be back to watch when Nick Fury gathers The Avengers to fight their next battle.

One final note:  If you haven’t already seen it and are still planning to, save yourself the extra money you’d have to shell out to see it in 3D, which, in my opinion did nothing to enhance the experience of the film.  For me, it only increased the headache.

2 thoughts on “The Avengers Did Indeed Punish…Me!”