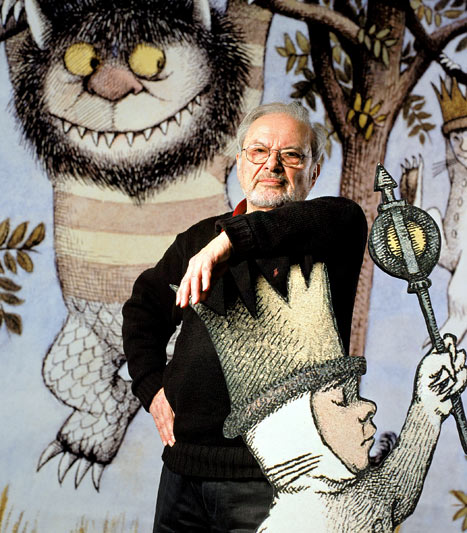 It was with great sadness that I awoke on Tuesday morning to the news of Maurice Sendak‘s passing.  The astoundingly talented author and illustrator was a predominant presence in my childhood, to be sure.  I know I am only one of multitudes who have enjoyed his work over the decades his artistry has spanned.  While I know the deserving remembrances of him have been fittingly pervasive over the last few days, I felt compelled to add my own small contribution, in honor of Mr. Sendak and his memory.

As a child, I was familiar with some of his best known children’s

literature ~ such as the classic Where The Wild Things Are, with its fantastically creative illustrations that forever changed the way children perceived “monsters”, by having Max, its protagonist, actually engage with the creatures as opposed to merely fearing and hiding from them.  Other popular titles in Sendak’s canon include the often controversial (due to one of the young characters being naked through a portion of the book) In The Night Kitchen and Outside Over There. 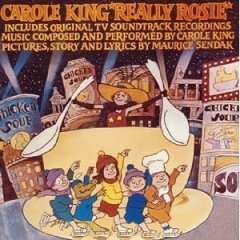 But the most memorable and beloved contribution he made to my childhood is perhaps lesser-known than some of the works mentioned above.  In 1975, Sendak collaborated with the gifted and iconic singer-songwriter Carole King on a children’s animated television production called Really Rosie, which was also made into an album.  To be honest, I don’t remember seeing the television show, but the album, and its accompanying Nutshell Library remains one of my most treasured childhood memories.

Decades later, I still enjoy listening to the music (though I’ve now got it on disc vs vinyl) and I still have a copy of the Nutshell Library (my current version being in much better condition than my original, which hung together by a thread).  And in fact (as some of you can attest), the combination of the two have become one of my favorite baby gifts to give to new mothers and their children.  They truly are timeless.  (Unless I’m so swayed by sentimentality, I can’t see it any other way…)

The four books in the collection are each brilliant displays of Sendak’s distinctive illustrative style, the “stories” clever, humorous and, sometimes yielding a valuable lesson (as in the case of “Pierre”, about a boy whose response to everyone and everything is “I don’t care” ~ of course his indifference ends up getting him into the very trouble that results in the moral of the story).  The books are especially delightful when set to King’s songs.  That I can still sing all of the words whether or not I’m listening to the music, and envision the illustrations even without the palm-sized books in hand ~ is a testament to the imprint they made on my young mind.  I am ~ and will always be ~ filled with sweet nostalgia whenever I read or hear sung “Alligators All Around”, “One Was Johnny”, “Pierre” and “Chicken Soup With Rice”.  It’s thanks to those pint-sized books that I feel the same sense of nostalgia whenever I see any of Sendak’s illustrations, which are instantly recognizable as his, whether I’m familiar with them or not.

A heartfelt thank you, dear Maurice, for the legacy you left on generations of children and adults alike.  Although I know you weren’t a believer in the afterlife, I sincerely hope you are, at this very moment, commiserating with your very own self-proclaimed Gods:  Herman Melville, Emily Dickinson and Mozart. ———->

May you rest in peace among the magical creatures and characters you created over your richly realized life.

A final note to my readers: If you have the time (and haven’t already), please listen (by clicking on the highlighted link) to NPR’s hour of Fresh Air devoted to Maurice Sendak, which includes pieces of four interviews Terry Gross conducted with Sendak over the span of 25 years.  It offers a wonderfully interesting, informative, humorous and deeply touching portrait of Sendak.