Consider yourself forewarned that this will be the first of many reviews to come on films featuring Michael Fassbender.  After seeing him at year’s end in films such 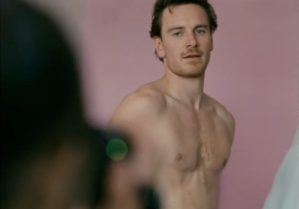 as A Dangerous Method and Shame (a stunning, searing performance for which he should have earned a Best Actor Oscar nomination), I have become a full-on Fan (yes, that’s with a capital “F”).  I have caught Fassbender Fever…in a big way.  And am therefore working my way through his filmography.  Yeah, he’s more than easy on the eyes ~ and as some may know, offers plenty of himself on which to feast the eyes (see Shame for full-frontal Fassbender).  BUT there is much, much more to this man than just a handsome face (and breathtaking body).  He is a terrifically talented actor, who shows great range and has yet to disappoint in anything I’ve seen.

His performance in Fish Tank is no exception.  Written and directed by Andrea Arnold, the film won Best British Film at the 2010 BAFTAs ~ with good reason.  It is a unique coming-of-age story centered on Mia, a foul-mouthed, back-talking, rebellious teen who has been kicked out of school and is struggling to find a way out of her stifled, unsupportive home life in a British housing project with a bitter, unloving single mother and feisty younger sister.  (Father, whoever he is, is nowhere in sight nor is he ever even mentioned.) 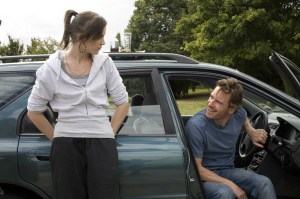 Changes are set in motion when the girls’ mother brings home new boyfriend Connor (Fassbender), who ultimately has a profound effect on each of the women in the family (in various ways and for various reasons), but on no one more so than Mia.  It is fascinating to observe the changing dynamics and ripple effects created by Connor’s charismatic presence, which, in the beginning is primarily positive for these women lacking any sort of stable, supportive male figure in their lives.  It is Mia’s struggle to differentiate between Connor as a father figure and a man to whom she has a burgeoning attraction, that ultimately proves to be the stimulus for change ~ and growth ~ in Mia’s life.

Mia is played by newcomer Katie Jarvis, who was apparently “discovered” by the casting director at a train station 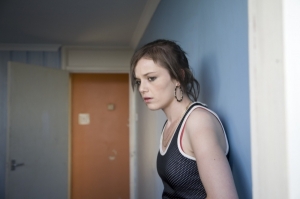 during an argument with her boyfriend.  It is remarkable that this is her first time acting ~ I have to wonder if it is that very lack of any previous experience that lends to the rawness and emotional honesty of her performance.  She is fantastic as Mia ~ conveying her pent-up energy, aggression and anger (often expressed through her love of 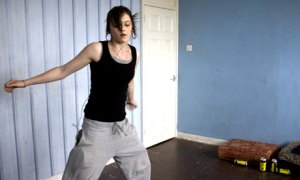 hip-hop dance), but also a clear longing for authentic, consistent human connection, which is most unexpectedly offered to her through Connor, who shows her more interest, support, encouragement and caring than perhaps anyone in her life ever has.  It is easy to see how Mia’s feelings for this handsome and charming new man in their lives become confused, particularly at her age and in her circumstances.  It is compelling to watch her headstrong defenses begin to break down and soften in his presence.

The cinematography and lighting are major players in the film as well.  There are colorful, brightly lit, beautifully saturated scenes contrasted with moody, evocatively back-lit scenes ~ both methods are gritty and gorgeous and go a long way towards setting the emotional mood of any given scene.  Furthermore, the contained but jumpy nature of a hand-held camera adds to a sense of the claustrophobic “fish tank” in which Mia is drowning.

The final third of the movie is at once unsettling (with one scene in particular that threatened to ruin the film for me, but thankfully didn’t go where I feared it might), emotionally raw, and acutely moving in its

own distinctive way (an exchange of “I hate you’s” accompanied by an embrace between the two sisters speaks volumes about how they’ve learned to express love).   Finally, I don’t think I’m being biased when I say that I’m not sure this film could have worked as it did with someone other than Fassbender in the role of Connor, who could easily be misconstrued as someone far less sympathetic than I found him to be due to Fassbender’s portrayal.  That’s not to say I condone what transpires; however, I sincerely see all of the characters in this narrative as deeply flawed, but very human, beings.  As such, Fish Tank proves to be surprisingly effective and memorable.

1 thought on “Fish Tank ~ Reeled In By the Bait”