Jason Segel is Jeff, a 30-year-old stoner who lives at home with his mother (played by Susan Sarandon).  Obsessed with signs (both in the literal sense and, amusingly, in reference to M. Night Shyamalan‘s film of the same name), he is searching, rather aimlessly, for his “purpose”.  Segel is entirely winning despite the somewhat stereotypical character set-up.  Jeff is a gentle giant with a heart of gold, well-meaning even in his haphazard misst 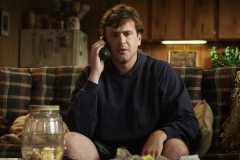 eps (at which everyone in his family pokes fun).  Segel is perfect in this role and shows greater range than I’ve ever seen in him, beautifully and convincingly straddling the line between hapless lug and sincere loving soul, between comedy and drama.  It is really he who holds this film together and had me invested in any way.

Ed Helms, on the other hand, plays his narcissistic moron of an older brother, Pat, who is continually judging Jeff even when his own life is in actuality no less (if not more so) in disrepair ~  his marriage (to the always fabulous Judy Greer) disintegrating, with good reason (who could blame her?!), making ridiculous choices (like purchasing a brand new Porsche on a clea 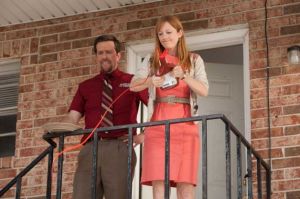 rly meager salary), and holding “business meetings” at Hooters.  Not that Helms doesn’t have some humorous scenes (I do think he is a gifted comedian), but it really is tough to like or sympathize with him in any way since most everything he says and does here is idiotic.

Sarandon, who is perfectly pleasant as the boys’ beleaguered widowed mother has her own story arc, which takes a rather random turn, though in truth, one which I predicted…so perhaps it wasn’t as “random” as intended?

The movie really went off the rails for me at what was supposed to be the “climax” of the film, becoming almost farcical, like a bad tv movie in its convenient converging of all the characters in one place for a fairly melodramatic event, which falls strangely flat (partly due to its oddly sluggish pacing).  It’s too bad, since the film really does have potential in the beginning, but then loses its way.

So while it has its moments, some very funny and some actually touching, I didn’t care for this Duplass Bros. film nearly as much as their last film foray together on Cyrus, which I enjoyed immensely (click on Cyrus to view the trailer).  If you haven’t seen it, it’s a great renter with a pitch perfect cast (Jonah Hill, John C. Reilly, Marisa Tomei, Catherine Keener) and a quirky story both deeply funny and unexpectedly moving.  If you want to check out the Duplass Bros. work, I recommend Cyrus over Jeff.