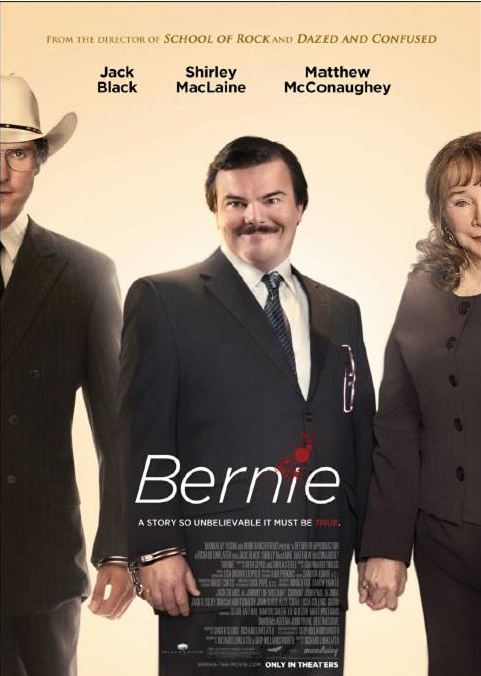 Bernie is a Richard Linklater film unlike any I’ve ever seen…by him or anyone else, for that matter.  I knew very little about the movie going in, which I think contributed to my enjoyment of and appreciation for the film.  It is a sharply droll film with an unexpectedly dark undercurrent so subtly crafted, before you know it, you are every bit as engrossed by and invested in the story as are the real-life townspeople “cast” in the documentary-style narrative.  It is wholly unique in its structure, as it is not quite a “mockumentary” (in the vein of, for instance, Christopher Guest films such as This Is Spinal Tap or Waiting For Guffman – it takes itself more seriously than those), yet precisely because it is based on a true story and so many real-life residents are used within the telling of that story, it often feels like a (fantastically riveting and entertaining) documentary.

Bernie is the remarkably true story of Bernie Tiede (played by the multi-talented and arguably undervalued Jack Black), a small-town Texas mortician whose preternaturally cheerful, caring and generous disposition makes him wildly popular with townsfolk across the board, young and old, male and female alike.  He eventually wins over even the crotchety wealthy widow Marjorie Nugent, played with delicious wickedness by Shirley MacLaine.  Bernie and Ms. Nugent form a curiously uncommon (and definition-defying) relationship that eventually tests even the perpetually patient and optimistic Bernie, causing him, in a

moment of temporary insanity (or, one could argue, temporary sanity), to reach a breaking point that drives him to commit a crime you don’t see coming (unless you’re familiar with the true-life case, or have read or seen anything about the movie!)  This act precipitates a chain of events that has to be seen to be believed, culminating in a trial every bit as compelling and absorbing as any modern-day real-life crime drama.

Linklater effectively presents a vivid portrait of Bernie, both through the scenes in which he is featured, and perhaps even more so, through the “commentary” provided by the townspeople of Carthage, Texas, many of whom are true residents who actually know (and genuinely love) the real Bernie.  It’s difficult to imagine any actors, no matter how talented, could do a better job of conveying

the emotions, details and speculation surrounding the man and the events than they do.  They are a fabulously colorful bunch.  It would ordinarily seem risky to employ non-actors in roles so crucial to the story, but here it works like a charm!  You are so thoroughly transplanted into the minds and sensibilities of these small-town Texans, you nearly forget you’re watching a movie and not a documentary or some sort of exposé (save for the outlandishness of the story and the wonderfully quirky comedy inherent in it).  Linklater seamlessly blends the two worlds ~ that of the story told by professional actors with that of the real-life extras who so colorfully (literally and figuratively) illustrate the story of Bernie.  By the time the trial for the crime gets underway, it’s impossible not to have become as invested in the outcome (right or wrong) as those intimately involved in the case.

Jack Black’s full range of talent (and it’s a vast range) is on display in his portrayal of Bernie ~ he sings, he dances, he expertly underplays the comedy, and even demonstrates an uncommonly sincere dramatic side.  And believe it or not, all of these various elements make sense within the context of the film.  Black fully inhabits Bernie and beautifully brings him to life, in all his (im)perfection.

Matthew McConaughey (in a continuation of his recent impressive acting streak – see my Magic Mike review) plays the town D.A., hellbent on seeing that justice is served, no matter how beloved the accused.  While his screen-time is limited, McConaughey is such utter perfection as Danny Buck that he leaves his mark on your memory.  It’s worth noting that McConaughey’s mother has her own little cameo as one of the talking heads of the town ~ she’s fantastic as well, fitting right in with the rest of the townspeople.

Bernie is ultimately a truly fascinating character study ~ of a well-meaning and flawed man whose best intentions end up getting the best of him, and of the small, close-knit southern community in which he resides.  Bernie is an unexpected sheer pleasure through and through, by turns deeply funny, surprisingly touching and even thought-provoking.  I highly recommend it.

1 thought on “Bernie, Bernie, Oh What Have You Done?”