I was just beginning a Masters Degree program when this AMC series debuted back in 2008, and thus was (regrettably) too deeply buried in my studies to have the time to be watching much of anything.  Hence my being so unforgivably behind in starting this phenomenal series.  I’d heard and read a lot of positive feedback about it, but wasn’t sure whether I could stomach the subject matter…for those of you who don’t already know, Bryan 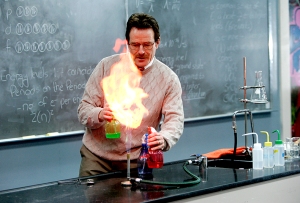 Cranston plays Walter White, a high school chemistry teacher who learns he has inoperable, terminal lung cancer and proceeds (though a series of events) to put his chemistry skills and knowledge to use for cooking crystal meth in order to make the money necessary to leave ample support for his family.  A weighty (and some might argue, farfetched) scenario, to be sure (echos of the Showtime series Weeds notwithstanding, which won me over in its first few seasons), so it is utterly astonishing to see how 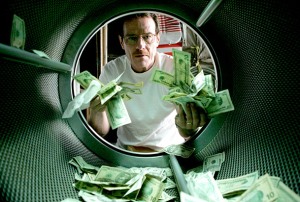 brilliantly Vince Gilligan (the series’ creator and head writer) and company make such a premise work.  It is somehow entirely believable and without a doubt, one of the most addictive (no pun intended) television shows I have ever seen.  END_OF_DOCUMENT_TOKEN_TO_BE_REPLACED

Whether you know ~ or care ~ anything about Comic-Con, the annual comic-book and Sci-Fi convention in San Diego, California that draws over a hundred thousand fans each year, this is a thoroughly enjoyable documentary film.  Despite my proximity to San Diego, I have never been to Comic-Con, nor have I ever had any burning desire to attend; however, I’ve always been curious about this much-talked-about yearly convergence of self-proclaimed “geeks” ~ and this was just the ticket into that wonderfully weird and wacky world. END_OF_DOCUMENT_TOKEN_TO_BE_REPLACED 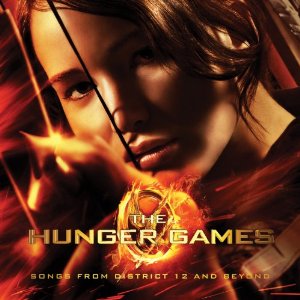 Soundtracks have always been one of my favorite ways to capture and retain the mood and memory of a film, as well as to discover new (and old) music.  They are akin to a professional “mix tape”.  And, oh, how I love “mixes”…of course I long ago graduated from mix tapes to mix-CD’s, but I’ve enjoyed countless hours spent compiling assortments of music over the years, in part inspired by my love for soundtracks.  Maybe one of these days, I’ll put together a list of some of my all-time favorite soundtrack albums…I’d love to hear yours, too, so please feel free to share!

One of the proven “Kings” of film soundtrack production is Grammy and Academy Award winning producer/songwriter T-Bone Burnett.  Here, he has done it once again, gathering a unique mix of musicians, both mainstream and lesser known, all of whom do an exceptional job of capturing the themes and mood of the book (and film) through their songs.  I first listened to this album after reading the book, before seeing the movie, and truly felt like I was reliving the book through the songs ~ via both sound AND lyrics.  In some cases lyrics are taken directly from the pages of the book ~ and they translate in every instance.  Each track has a place here.  Burnett chose his artists wisely…and they certainly delivered.

Very few of the songs on this soundtrack are actually featured in the film.  It is more a compilation of songs “inspired” by The Hunger Games.  There are definitely strains of both Oh Brother Where Art Thou and Cold Mountain in the album’s frequently folksy, Appalachian style, which I wouldn’t necessarily have imagined for this film.  But it works.  Very well indeed.  And there are plenty of non-folksy tracks to satisfy all tastes. END_OF_DOCUMENT_TOKEN_TO_BE_REPLACED 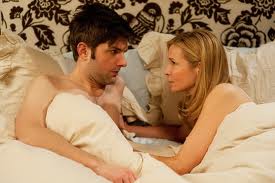 Jason (Adam Scott) and Jules (Jennifer Westfeldt) are long-time platonic friends who decide to have a child together (before it’s “too late”), split custody and care 50/50, while each continuing to look for “the One”.  Their married friends (comically ~ and at times, heartbreakingly ~ played by the reunited Bridesmaids clan listed above), are in equal measure shocked, wary and even offended by the idea (not that they share their feelings with the pre-natal pair).

Although a relatively novel idea at its premise, it is also one of those story-lines in which you know the inevitable outcome from the outset, so I wasn’t sure whether it would work.  However, I actually liked and appreciated the journey on which it took me to get from that tentative spark of an idea to the predictable conclusion.  It felt earned, refreshingly honest and on-the-mark…in fact, increasingly so as the film progressed.

The conversations and situations that ensue are actually timely and interesting and are, for the most part, handled deftly by the talented and likable cast, who, with their easy rapport, are easily believable as friends .  While Rudolph and O’Dowd play the more comedic couple, Wiig and Hamm’s screen couple prove to be surprisingly straight and serious, to great effect.  Westfeldt has a sharp ear for dialogue ~ even if she doesn’t knock my socks off as an actress (if only because she seems to play the same character in every film she does), I very much respect her work and direction.  And although Adam Scott is one of my favorite comedic actors on television (as the self-deprecating Ben opposite Amy Poehler‘s Leslie Knope in the fantastic Parks & Rec), he quite convincingly comes to the plate with a fairly raw emotional scene at the film’s end ~ a scene that entirely worked for me.

A likable cast, cute kids, the guilty pleasure of gorgeous Manhattan & Brooklyn locations and sets and (at least for this single “middle-aged” childless gal) thought-provoking subject matter, all made for an emotionally honest, intriguing and enjoyable journey.

The highly anticipated film adaptation of Suzanne Collins‘ hugely popular trilogy of Young Adult novels has me questioning anew what exactly it is that makes page to screen work versus not…and whether I’m better off either NOT seeing the film if I’ve read the book (and liked it) or NOT reading the book and seeing the film instead.  It’s probably safe to say that in most cases, the book is far superior to the film adaptation…although now and again, they “get it right” and manage to convey the brilliance on the page in equal measure to the screen (the film version of Ian McEwan‘s novel Atonement comes to mind, as do most, if not all, of the Harry Potter series of films…)  But I digress, as obviously such a debate deserves its own separate discussion.

I just recently read ~ and enjoyed ~ The Hunger Games myself, (which, incidentally, seems made to be a movie).  Although Harry Potter it was not (will anything ever match that creative genius?), I did end up getting sucked into and invested in the characters and the (albeit dark, savage and morbid) story.  It’s still a bit difficult for me to grasp that material of this nature ~ kids killing kids, by force of their “government”, no less ~ was intended for such a young audience (heck, it’s heavy subject matter for any age).  Despite getting drawn into the dystopian world of Panem and growing quite fond of many of the primary characters/protagonists (Katniss, Peeta, Gale, Haymitch, Cinna, et al.), I’m still not sure I buy (or perhaps I just don’t fully understand) the reasoning behind (the NEED for) the Games themselves in this fictional landscape.  It is, as a good friend of mine who has yet to read the book or see the movie said as we were discussing the premise, “a hard pill to swallow” and I couldn’t agree more.  All of that said, I felt there was great potential for a film version of the novel and thus had high expectations.  And while parts of it worked, overall it fell short for me in capturing the emotion, feel and intricacies that the book did. END_OF_DOCUMENT_TOKEN_TO_BE_REPLACED