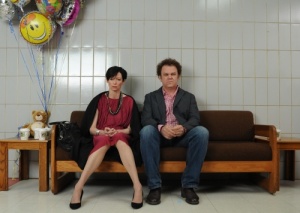 Wow.  I am still reeling from this one…I think this is going to be one of those that really sticks with me long after I’ve seen it.  (Sidenote: I viewed this on 1/24/12 and now that I’m entering this review well after the fact, I can say with certainty that I was right!  It did indeed stay with me…perhaps longer than I’d have liked, which is, in my experience, truly an indication of its power.)

I knew going in that it was going to be disturbing and difficult subject matter, though not how it would be presented or play out.  Indeed it was horrifically harrowing, yet I was engrossed and engaged from start to finish.  Though it left some questions unanswered (and there were a few aspects with which I took issue), overall I thought it was a superbly-done and extremely well-acted film. 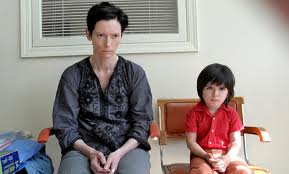 We learn early on that the son (the Kevin of the title) – and first child – of Tilda Swinton’s character, Eva, commits some sort of heinous act on par with a Columbine or other such violent school tragedy.  We are, bit by bit, led to the final reveal of that through both flashbacks and scenes set in the present day.  It does quite a nice job of building characters and setting the stage without revealing too much.  In fact, nothing quite prepares you for the extent of the tragedy that ensues…